This weekend I have been taking my own advice in preparing for winter. I was hoping for a longer transition from the mild autumn to the winter chill but apparently not. Thursday it was 25 degrees, we were in t-shirts and lunch in the garden was under the trees as the sun was too hot. Today, three days later, the woodburner was lit as soon as we returned from Mortimer walking. It's grey and windy and barely above freezing, there has even been a light snowfall up on the Millevaches Plateau.

Andrew's current office is downstairs in one of the notaires rooms and was freezing last winter. I have dug out some curtains for the door which should help and we've moved a large rug down there to stop some of the draughts coming up through the floor, and my goodness were there draughts. The four notaires rooms were created from the old stable, sometime in the late 1920's we think. Not much thought went into this process as we discovered yesterday. There are a set of collapsing wooden steps from the garden into this raised section of the house which Andrew moved to investigate what was behind them. And the answer - nothing. Yep nothing. There was a gaping hole (now filled with a piece of board) and some blocks on which sits the wooden floor. No wonder it was always so cold! All of this is only temporary as the main house is phase two of our renovation project but it should add a couple of degrees to downstairs.

I've swapped our summer and winter clothes over, although I'm sure there is a box missing somewhere, and have decided I have too many items I just don't wear and so am going to have a 'vide-armoire'. Woolly scarves have been washed and there's an extra layer on the bed, not quite ready for the winter duvet yet. And salads have been replaced by soups. I love soup making and fortunately my kitchen can cope with this level of activity. First of the season was Nigel Slater's cauliflower and cheese which is made with one of our favourite cheeses - Cantal. 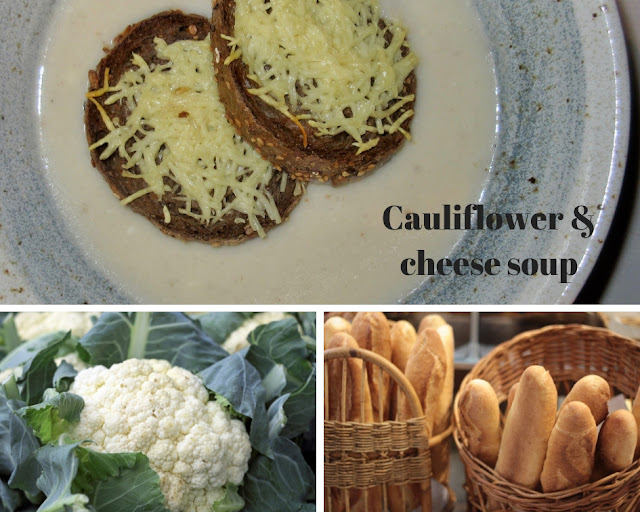 Talking of kitchens we have a new addition - a mini oven! We realised that the barn kitchen was not going to happen for a few months and that there were some foods we really missed, jacket and roast potatoes being high on the list. So we popped into ElectroDepot and bought a mini-oven and had a roast for the first time in a year. It also has the added advantage of getting quite warm and so heats the kitchen.

We now feel happy about the winter ahead, we're in a much better position than last year. It's not perfect but we're hoping at some point the barn will be progressed enough for us to move into. But until that time we know we can stay warm and eat well. What more do we need?