It's been over a month since the plasterer arrived and he finished on Tuesday - two days before the electrician. To say we've been juggling is an understatement as several elements of the conversion had to come together for the end of October, and in an order you wouldn't normally do. We moved from one task to the next and sometimes back again, I'll take you through this month's achievements.

Our plasterer arrived and said that the plasterboarding that we'd done was fine and we were all good to go. For me plastering is the first real job on a site that makes you feel that you're on top of the hill. It was a long haul, with awkward shapes and high ceilings. As seen on nearly every Grand Designs programme it is the new windows that have been the fly in the ointment. We had a call from our suppliers to say that they were 'très compliqué' (which they're really not) and that they wouldn't be ready until January. As they wanted the window openings to be left unplastered, several of the walls have remained as such. 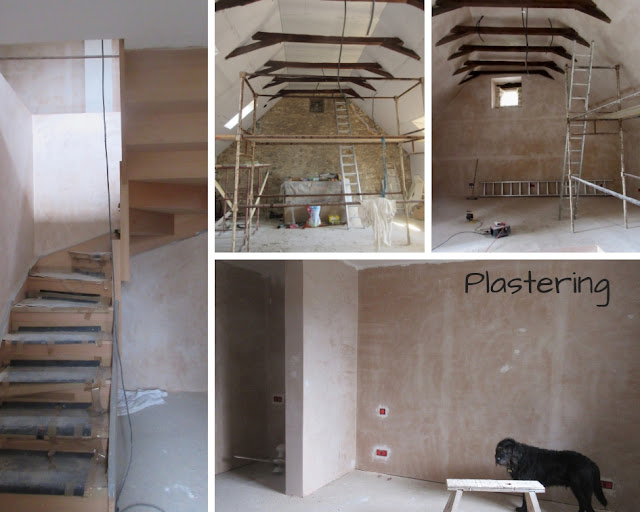 We have insulated the barn to quite a high level, all external walls and the ceiling but this has meant sacrificing some of the character. We were keen to retain the stonework in the upstairs open plan area on the wall which joins the main house (so it doesn't need insulating). As it is very dirty work we wanted to get as much of it done before plastering, and also our charming plasterer had said we could use his extra high scaffolding. All the old mortar had to be removed to a depth of about 2 centimetres, and then refilled. This is not as easy as it sounds as there are no neat lines, the mixture is quite sloppy and you're desperate for it to not all fall off the hawk. Once the mixture has been shoved  applied it has to dry for and hour or so before you go back, smooth it a bit more and then take a wire brush to remove all the mortar that is on the stone, leaving the joints. We're over halfway there, at least we can stand on the floor and work now. 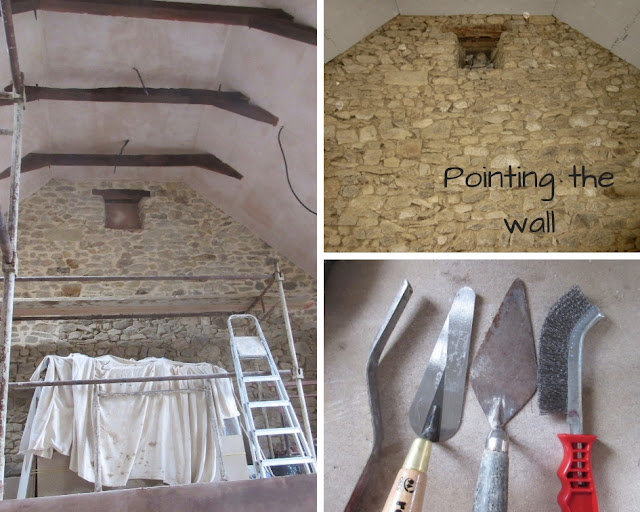 Thursday was the big day. Our electrician had agreed that Andrew could pull all the cables so that it was only the 'consumer' unit and junction boxes that needed to be connected, and of course everything checked. For the last week Andrew has been spending every spare minute (he does have a 'day job' as well) connecting sockets, switches and putting up lights. The ceiling lights meant I had to get on with some painting (hence the pointing has not been finished on the wall) as it's much easier to do this before the recessed spots go in. See what I mean? We're still pointing & plastering and yet I'm painting!

The good news was that the electrician passed all of Andrew's work and was able to connect everything up. In fact Andrew had done so much that Justin only had to spend a day with us and not the scheduled two. You have no idea what it felt like when the lights went on - a huge milestone passed. 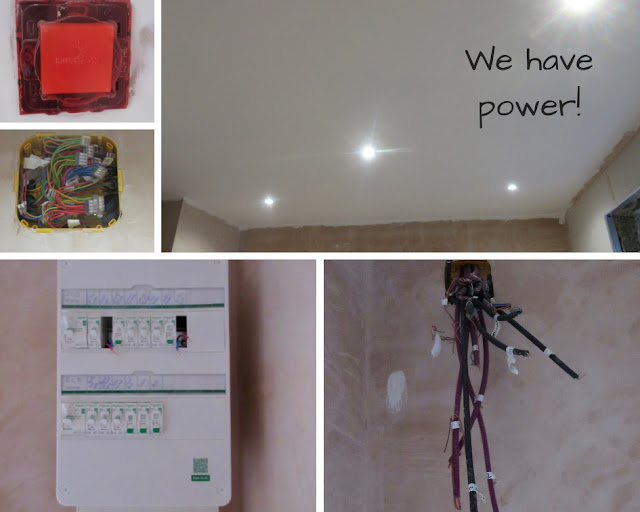 For the past few days, and over this weekend, I will be up the scaffolding again with my trusty paint roller. On Monday the pellet stove is being installed (and it will work as we have electricity!) and I would really like to get the end wall that it will sit against painted. And as the plasterer has said I can hold on to the tower a little longer I'm taking advantage of it to paint the 4 metre plus ceilings. Plus I'd like to get them done before we put the floor down. 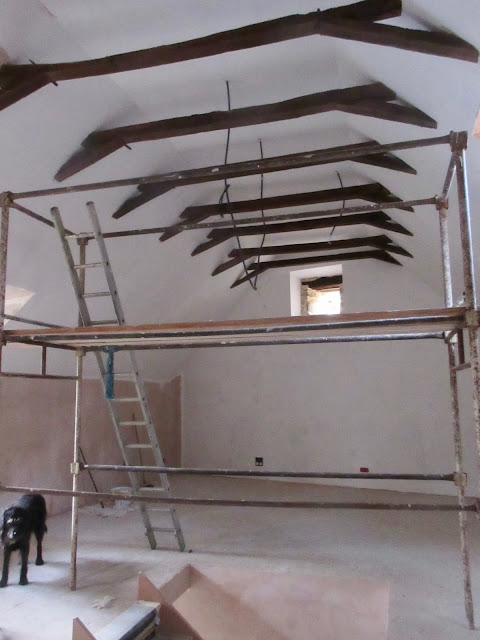 Although we have no more trades booked in, and so technically no deadlines, we still have a lot to do. We need to give some thought to the two bathrooms, although planned I need to source the fittings and tiles. Flooring has to be sourced for downstairs and I can start to think about furniture - I have my spreadsheet with requirements and sizes that now goes everywhere with me.

In case you were getting bored with building site photographs, we found this spot out on a recent walk, as usual Mortimer headed straight for the water.