We all know that most of France has an obsession with mushrooms and Corrèze is no exception. For the last couple of weeks signs for the mushroom fair had been appearing, posters, wooden cut outs and window displays. We even had the programme delivered to us by hand, we were not being allowed to let this spectacle go unnoticed.

This year is the 20th anniversary of the fête and was organised by Corrèze Animation. We had been watching the weather forecast with a degree of nervousness, rain was predicted for the whole day and the temperature was dropping by ten degrees from the highs of the previous week. Now we desperately need the rain (as do the mushrooms) but we were keeping everything crossed that it would stay dry for the day's events. And I can confirm that mass finger-crossing works, it was windy but sunny and 20 degrees.

I will confess that for a day devoted to mushrooms there was a distinct lack of fungi! But it has been so dry that they have been severely reduced in numbers. There were a couple of stands selling them, giant cepes and some strange spongy ones stood out. I had a chat with the lady from 'la confrérie mycogastronomique gaillardaise' ( this national association was formed to promote any activity related to wild or cultivated mushrooms and we had representatives from Brive) who was kind enough to tell us about the fungi they had on display, which were good to eat and how to cook them. I will say now that I am not going to go round the woods picking and feasting, reputable sellers only for me.

The fête had a definite autumnal feel to it, there were sales of local apples, walnuts and sweet chestnuts. I finally found the perfect small basket (I'd been looking for ages) to do the morning croissant run with, and watched the man making them. It was quickly put to use to carry some 'beignets aux pommes' home which we enjoyed with friends. There were various bands and the fun went on for most of the day. 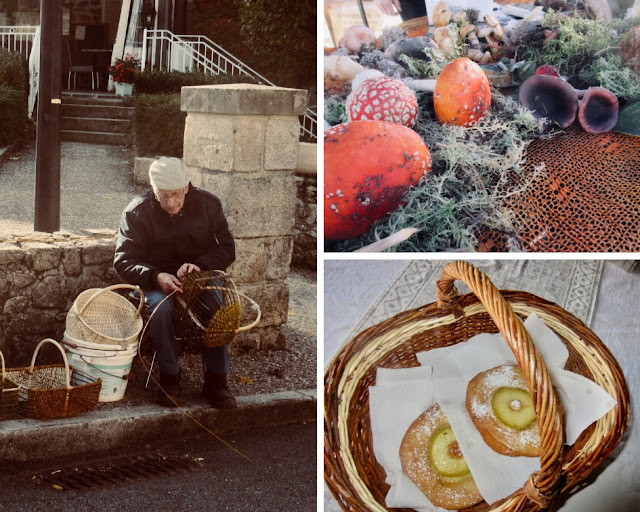 It was a lovely day, the fête well supported by villagers and visitors and congratulations to Corrèze Animation for their organisation.