Despite the heat Andrew has continued to make huge progress in the barn. We had two traditional roof windows, made from really heavy cast iron, which we were replacing with Velux. They are at the kitchen end of the space room and although we were tempted to add another near the sitting room area we would have had to ask permission and who knows what hurdles we would have had to jump through so we stuck with two. Andrew’s main focus at the moment is getting the plasterboard up (we have plasterer in at the end of September) and the replacement windows had to be in before this could be done. 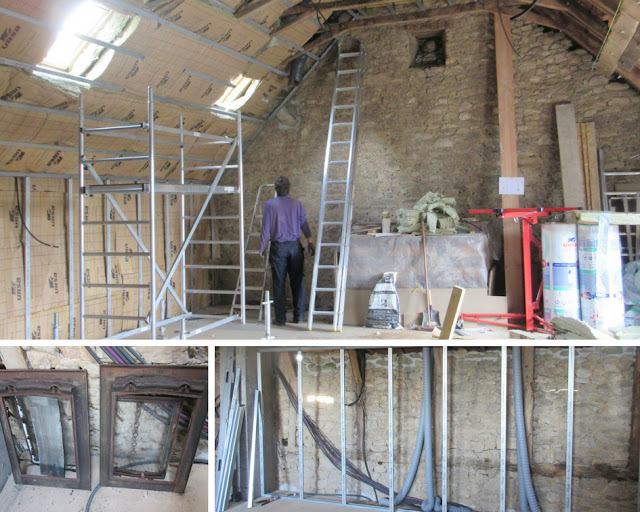 The first floor of the barn is warm anyway but at 30 plus degrees outside and at the top of a scaffold tower it was very uncomfortable. Coupled with the fact Andrew spent most of the installation with his head through the window gap and in full sun, I really don’t know how he did it. All the videos you watch on installing Velux make it look easy, and I’m sure it is when you have a nice modern roof  with straight timbers. Doing it in a centuries old barn with ancient timbers and a slate roof ain’t that easy! I was in charge of passing things up and selecting tiles and became a dab hand at drilling holes in slates. Not one broken.  The most nerve wracking part is when the glazed unit goes in, trying to get it to ‘catch’ (and I was only watching) but after two days they were in.

I have lost count of how many trips we have made to LeRoy Merlin for insulation and the metal rails for walls. We are insulating to a depth of 200mm which should conserve the heat in winter and keep it cooler in summer. The end wall was first to be done upstairs, at 4 metres high it wasn’t an easy job. But much easier than the sides which are vertical to 1600mm and then slope. Trying to manhandle a 2.7 metre long roll of insulation above your head is a challenge. 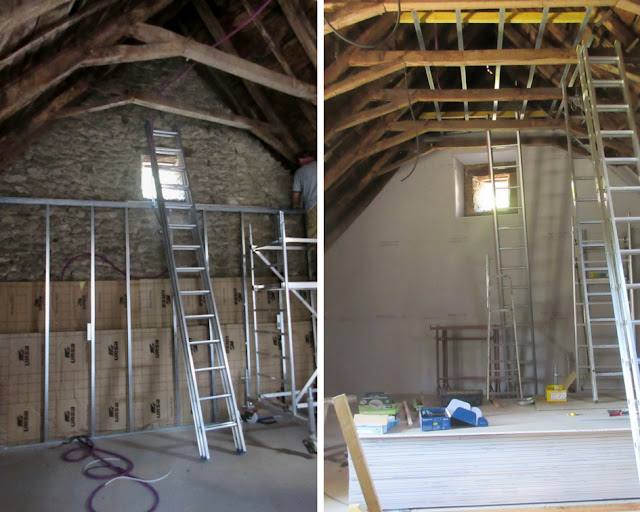 We had the surveyor from Invicta Stoves in Brive over to assess the upstairs of the barn. This is one open space with a sitting room area at one end, kitchen and dining area the other. The previous owners had built a chimney from the underbarn all the way up through the ground and first floor and we were hoping to utilise this for a wood burner. We had been really pleased with Invicta’s installation in the main house and wanted to use them again. It turned out that the chimney is next to useless and to have a wood burner necessitated a lot of expensive tubing, and a new chimney on the roof. The barn is going to be predominantly a rental so we looked at the option of a balanced flue pellet stove which would mean we wouldn’t need a chimney or piping. It would also be cleaner and renters wouldn’t have to lug dirty logs up the stairs. There was a reasonably priced one so we decided on that. 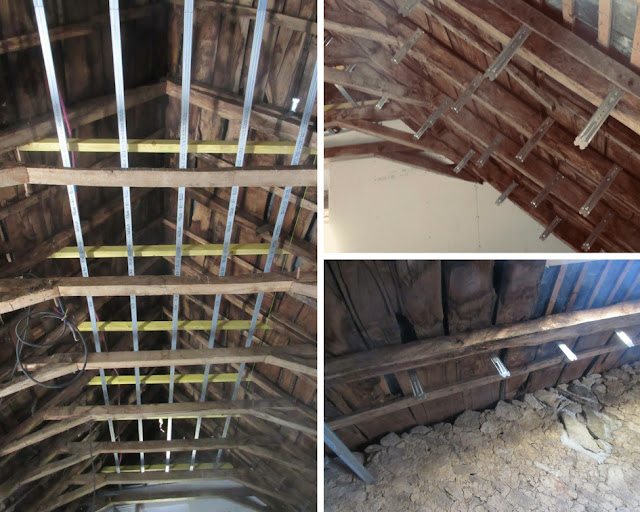 A couple of days later we popped into Invicta to sign the devis and asked if they had one on display. Andrew took one look at it and said that it looked like a dustbin and we weren’t having it. Of course all the other balanced flue options were way more expensive but the ever accommodating Sam gave us a deal on a really nice showroom model.


Next on the to do list was to finalise the kitchen design to make sure all the electrics were in the right place and Andrew could start thinking about the plumbing. I did some tweaking to the original layout and off to LeRoy Merlin (again) to look at their kitchens. We used their software for planning and pricing, and were a little confused when two prices came up at about €300 difference. We then remembered that with a lot of household items France has a two tier TVA (like VAT) system, 20% if you buy just the items but reducing to 5.5% if you have them installed. We found this first found this out with our wood burner, it ended up costing just a couple of hundred euros for professional installers to do the job. The same is true with the kitchen, it’s only about €300 euros. It’s worth that just to get the worktop cut! We haven’t ordered yet but we’re close.

Downstairs in the barn the bedrooms and bathrooms now have doors and nearly all the walls have plasterboard. I am having to seriously think about finishes and have started sourcing the bathrooms. We both are constantly thinking about the restoration, which can lead to conversations like this one at breakfast last week:

Andrew: I’ve been thinking about the small bats.
Me: the pipistrelles?
Andrew (with puzzled look):No - the insulation batts.

Thank heavens we’re having a break in a couple of weeks!