we accepted an offer on our house in Norfolk.


And then we did everything we were told not to (and had previously said we wouldn't) do!

A year on do we think we made the right decision?

Meyrignac-L'Eglise is a small hamlet of 47 people about 3 kilometres from us. In common with many French villages they had a communal bread oven, and like a lot of them it had fallen into disuse over the years. A community campaign has led to it being restored and today was the annual fête du pain. The bread oven is used to bake bread and pizzas and local suppliers sell produce.

Forget the small, domestic bread ovens that you may see, this is the size of a small house (in fact we have stayed in a converted one in Normandy). Fortunately today is our one cool day this week but I can imagine this was a popular meeting place in past winters.

We have bought one for lunch, I'll let you know what it's like. Meanwhile they are still cooking, the fête doesn't finish until 17.00 so if you're in the area it's worth a visit. 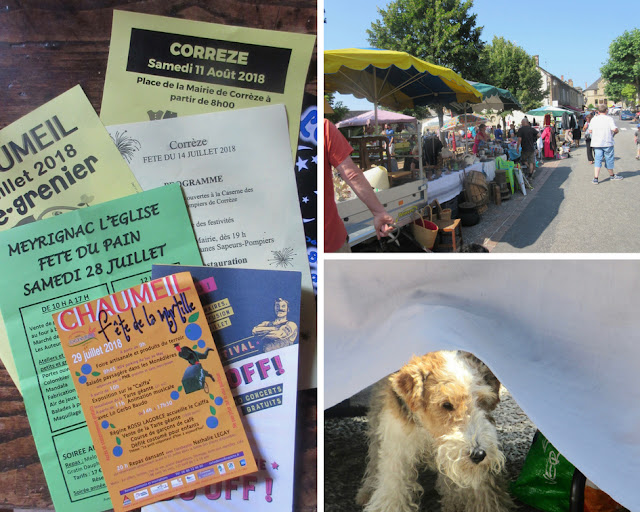 Since May, Corrèze (village and department) has become increasingly active and so have we. To the point of near exhaustion this week. Since last Saturday:

The Bastille day celebrations were excellent, culminating in a great firework display.

'Marché de pays' are quite common in this area, they take place in the evening with local producers setting up their stalls. Usually sponsored by a local society who provide a bar, barbecue facilities, fries and desserts. You can buy meat from a farmer, take it to the bbq to be cooked and enjoy a sociable evening with friends in the square. As always there is music as well. There are another two planned for this summer.

We are lucky to have a very active local history society and they are running evening walking tours around the village. This week we started from the Chapelle Notre Dame du Port du Salut, led by Pierre Clara and accompanied by a local, and very talented, accordionist Mathieu Martinie. My French isn't good enough to understand everything but I did OK, particularly with help from a friend. There was much laughing when we got to the church as the English have burnt it down in the past! 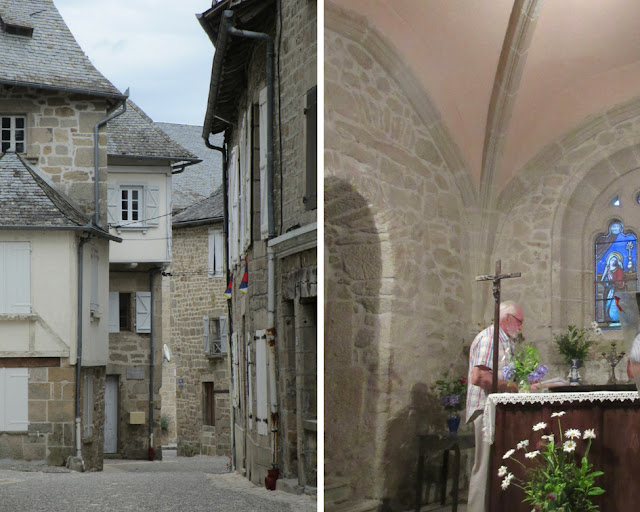 The church was the setting for Thursday's concert by talented duo the Duo Lyria. Their music was beautiful, we were all enchanted and hope that they return. 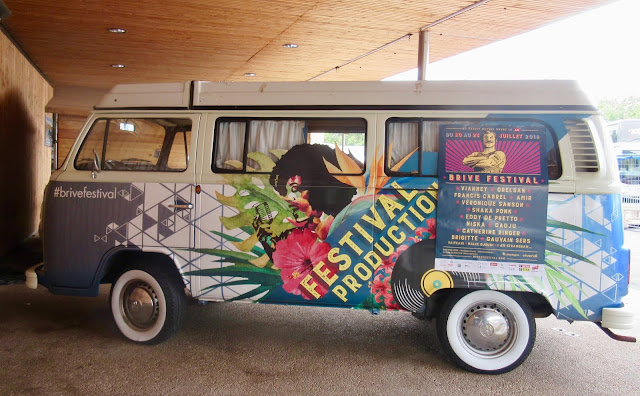 There were some other concerts we didn't make and of course we are still working on the barn.
I am amazed at how much happens, coming up we have a bread and myrtille festivals, more concerts and evening walks. There is a whole page in the Marie's latest bulletin of 'manifestations' in our village alone. It's turning out to be a busy summer!

I can't believe that the last proper update I did on the barn was in March. The problem is I take some photographs and think "must post that" and either:
or

Anyway when I last left you we had drawn the electrical plans, had approval from our electrician and had a September deadline. This may not sound too onerous but it meant that all walls had to be built and plasterboarded, and cables pulled. Fine if that's all we did but Andrew does have paid employment as well. The electrician delivered 100's of metres of cables and conduit (all French electrics have to be in conduit a.k.a ganne). Some is pre-filled with wire whereas others you fill yourself, depending on what your need is, we for example have an extraction system for the two bathrooms and kitchen so we have to 'bespoke' some conduit. At times it meant two people trying to thread wires through, often stretched from the house to the end of the garden. Everything has to be labelled and at times the barn looked like Dr. Who's Tardis. Actually it still does.

Another deadline was for the construction of a new external wall, the window company couldn't finalise the measurements until this was done. Regular readers will remember that we were removing the four glazed doors and replacing them with two large windows. The wall had to blend in with the existing building, both in colour, stone and style. Fortunately we have a large supply of granite in site but it was hard work. The stones had to brought up from the end of the garden and carefully selected, a little like a jigsaw puzzle. We started at 6 a.m each morning and had to stop and 11a.m. as the sun came round, it wasn't fun in 30 degrees. We still need to grout it but this will be done the same time as the other walls. Yet again I'm so impressed with Andrew's abilities. He has built brick walls before but never worked with stone, even local tradesmen have said he's done a good job. 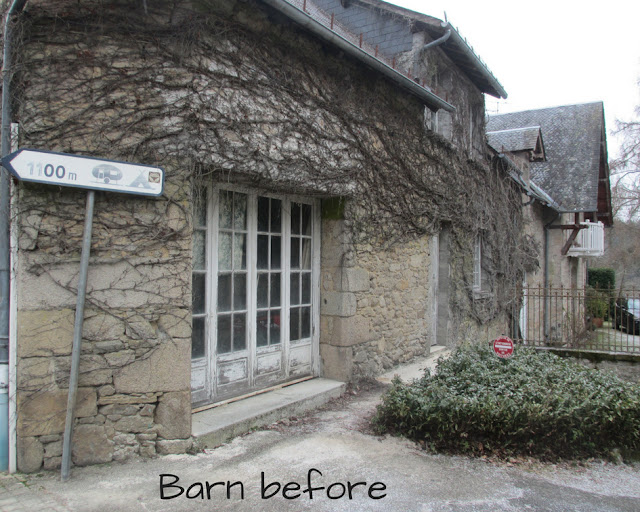 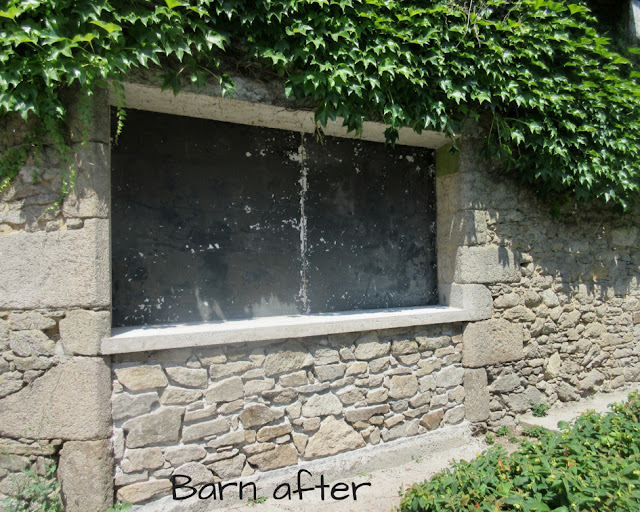 Last week the stairs went in, a real milestone. We took advantage of a friend before they went back to the U.K as it was a three person job. We had purchased the stairs from Lapeyre and they had been sitting in the garage for a few months. They came in four parts (plus the hand rails) and the two Andrews even resorted to reading the instructions. It was a little nerve wracking as the stairwell hadn't been built when we ordered the stairs and we only had a few millimetres tolerance either side. But it fitted! There were a few tricky moments, they both had the staircase on their backs several times, I was queen of the Jenga blocks and at one point our car jack was brought into play. 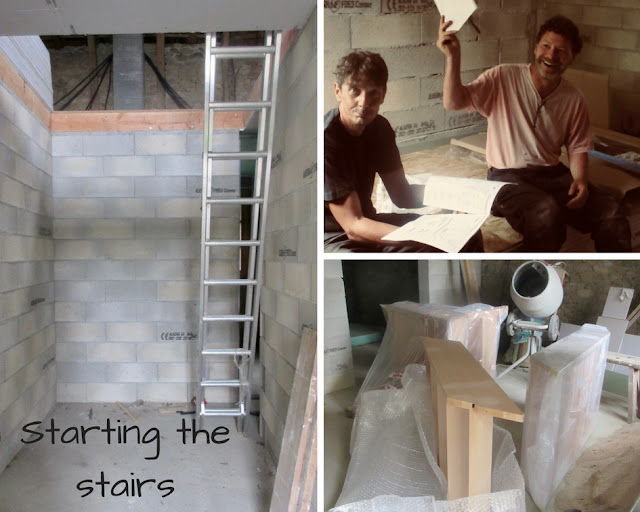 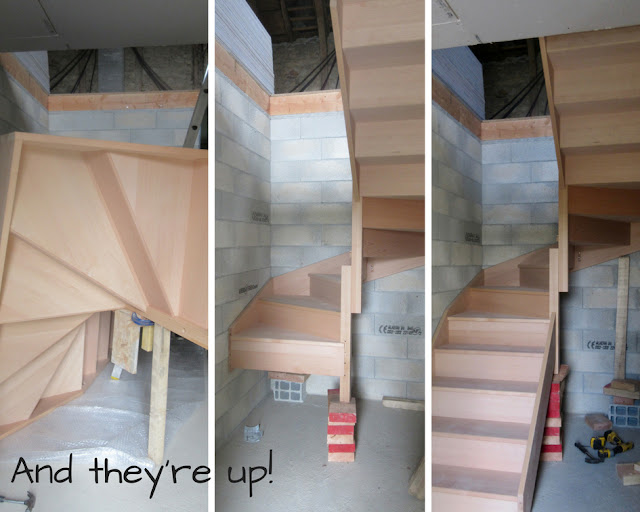 Now Andrew is building the internal walls, we're using the French system of metal rails. It's quite fast although it takes a lot of planning. We are putting insulation on the external walls and then plaster boarding. The hope is that downstairs walls will be finished in about 10 - 14 days and then we can move upstairs, which will have it's own challenges. There are no internal walls but all the externals have to be framed out, insulated and plasterboarded. This includes one at about 5 metres plus the ceiling. 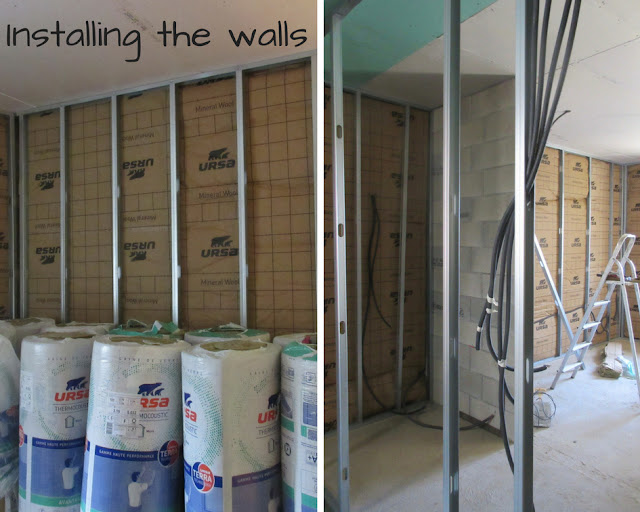 Progress has been so good that I am revisiting my concept board for the project as I'm starting to need to source finishes.

I feel I'm failing at convincing you all that we're working hard here as we've just spent a whole week doing nothing to the house. Our excuse was the arrival of our first visitors from England, so we just had to take time off to show them Corrèze.

The weather continued to be hot and so water featured quite heavily, particularly for Mortimer and his canine friend Dexter. Our regular evening walk was a huge hit as it features two lavoirs and a fountain. On our trip to the viewing tower at Mount Bessou (I made it to the top despite being terrified) included a trip to Lake Viam where we found a sandy beach, if only we had swimsuits. It didn't stop the dogs though. For their last day we had lunch in Argentat  followed by a side excursion to Les Cascades de Murel, again with cooling paddle.

Their visit coincided with the start of the summer sales so a day in Brive la Gaillarde was never in doubt. Andrew was very patient as us three ladies nipped in and out of the shops, although he ended up with as many bags as the rest of us. We couldn't resist a trip to Maisons du Monde and dragged a friend along to a vide maison that was happening in the village. I was very pleased with my purchase of vintage wine glasses and some table linen.

Tulle is our nearest large town and the French cultural centre for the accordion. Les Nuits de Nacre is a four day event where you can hear music everywhere, on the streets, small venues, the cathedral and open air stages. Yes, there is traditional French accordion music but nearly every music genre is covered. We particularly liked Doc Mad who played gypsy jazz. We are certainly going to spend more time there next year.

I'm hoping we have more visitors soon so I can play some more!

Should I be worried?

The staircase is going in the barn today and the two Andrews are reading the instructions! 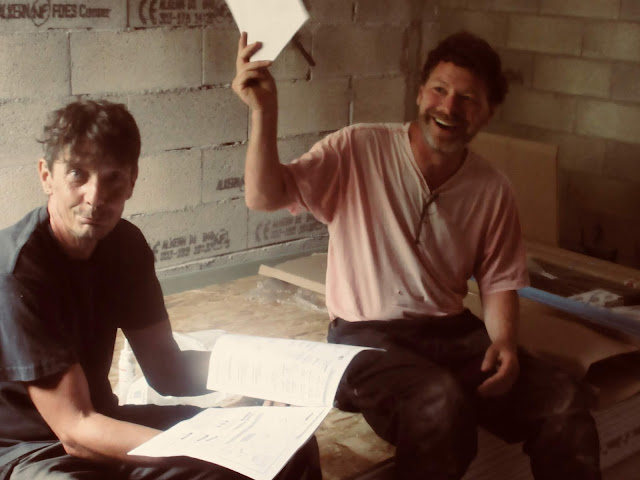 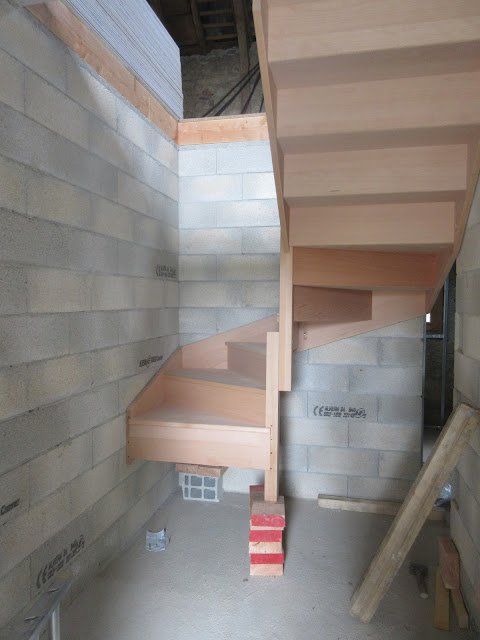 And at 4 p.m. I went up the stairs! So impressed with Andrew and Andrew.
No comments: Links to this post

Living the dream. It's not a phrase I particularly like although it's been said to us regularly, especially in the early months of o... 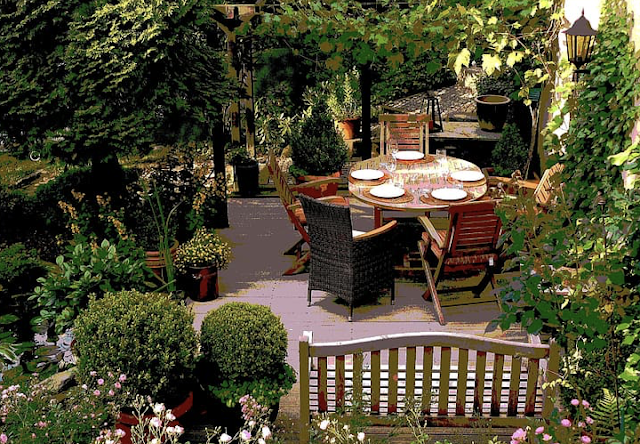