Last Saturday was a big day in the Corrèze calendar - the first wedding in the village of an English couple, and we were fortunate enough to be invited. 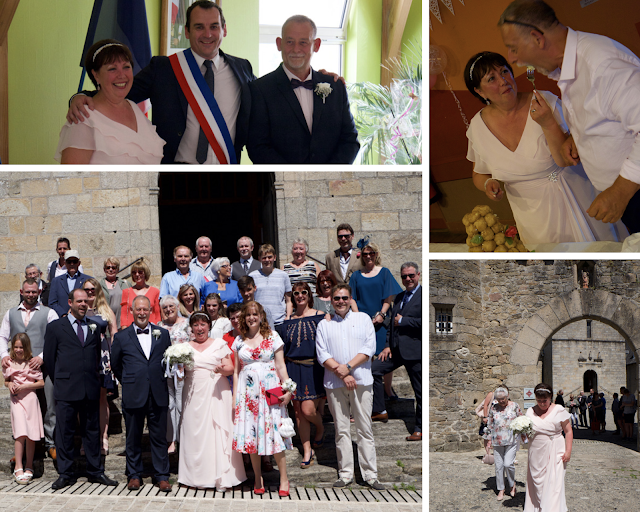 I first met Sue and John after only a few days of moving in to the Old Notaire's House. Andrew had returned to London so it was just Mortimer and me. We were on our evening dog walk when a chap, also dog walking, stopped and asked what breed of dog Mortimer was. As this is a fairly common question I had my little French speech prepared " I don't know what he is in French but in English he is..." I didn't get any further as he looked relieved and switched to English. After a short chat he invited me back home to meet Sue. Poor woman, I still blush as the first she knew was a big, black hairy dog came rushing into her spotlessly clean kitchen! But she made me really welcome, let me warm up and enjoy a glass of red wine.

Seven months on and we were delighted to be involved in their wedding. It was such a great occasion with so many people helping to make it special. The day before the event I was part of the team of helpers who transform the village hall. Last decorated about 40 years ago, when as the mayor's wife told me it was ' a la mode', it is not quite the decoration one would want for a wedding reception, red and orange felted walls, but an afternoon's work with LED curtain lights, metres of organza, balloons, bunting and greenery it looked great. 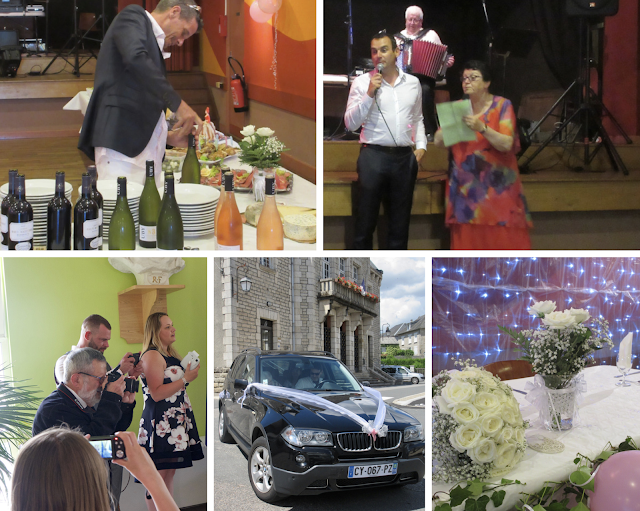 The day itself was full of people helping to make it special. Andrew had volunteered to drive the bridal car (he really wanted to tick something off his bucket list - driving through a French town beeping his horn!), there wasn't an official photographer so everyone was snapping away and there have been some gorgeous photographs on Facebook. People opened wine, supervised the catering and made sure that everything went smoothly.

There were friends and family from England, France, Ireland & Belgium, with important moments translated from French to English and vice versa. Entertainment was provided by a local family who sung both traditional and contemporary songs. Singing seems to be a big part of a French social occasion as even the Mayor joined forces with his mother to serenade John and Sue. 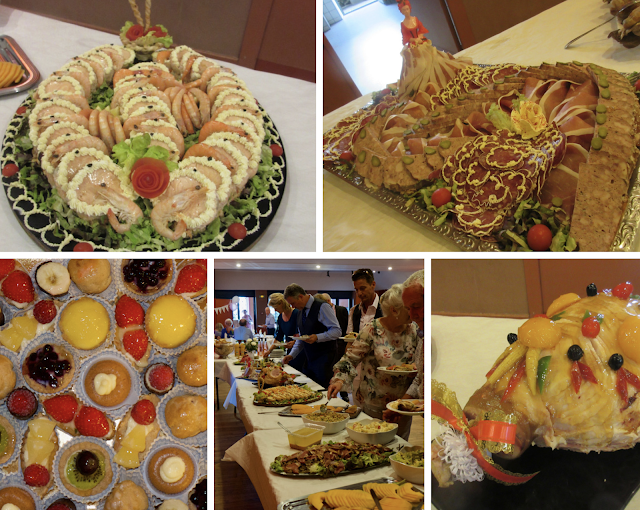 We are very lucky in the village to have an award winning traiteur, Bernard Fraysse, and they provided the catering. The presentation was amazing and it was thoroughly enjoyed by all.

It really was a lovely day, even the weather was superb, and we'd like to thank John and Sue for allowing us to share it with them and their friends.