Lest you think it's all fun & games here

Looking back at the last few posts you would be forgiven in thinking that we're living the high life at the Old Notaire's House. We have been having fun but we've been hard at work as well.

We have some deadlines for work in the barn, the electrician is arriving at the beginning of September to connect everything up for us, but he does need the cabling in place. Andrew, with some assistance from a very capable friend, has been pulling cables like crazy, I think we're up to about 600 metres and they're still in there. They have plaster boarded the ground floor ceilings and the walls have started to be insulated.

We were fortunate that the previous owners left approximately 70 metres of chestnut parquet flooring which we are going to use on the first floor. It has been in the barn for at least 20 years, possibly longer, and was filthy and in the wrong place. As unskilled labour my job was to give the bundles a quick clean and then move them upstairs. This involved moving them to a scaffold trestle at the bottom of the ladder, hoik them through the stairwell entrance to the first floor and then shift them into a new position. I certainly earned my pizza that day!

Inspired by our neighbour's recent tree felling, Andrew tackled an overgrown hedge in the garden. This had been planted about three metres from the summer kitchen door and was really overgrown. As it was a conifer we would never have been able to get it back into shape and so we decided it had to go. We still have to remove the stumps and landscape that area, but already it had made a huge difference.

We had a couple of leaks in the roof, one of which was in the bathroom. We haven't been using the shower as it wasn't tiled and the leak was over it. Andrew was happy to do a quick re-tile but not until the slipped roof slate was replaced. We had a roofer in who solved our issues and we now no longer have to have buckets in the sitting room and Andrew got the shower operational. The difference in being able to have a daily shower instead of a bath is wonderful, particularly in this hot weather.

Inspired by the improvement in the bathroom I decided to tackle the loo. This room was wallpapered but impossible to clean as the hand blocked paper just smeared ink everywhere. Conscious that visitors may have higher standards than us, I did a really quick paint job to clean the room up. Twenty four hours later, it's not a fine design statement and don't look at the edges, but it's so much better than before. 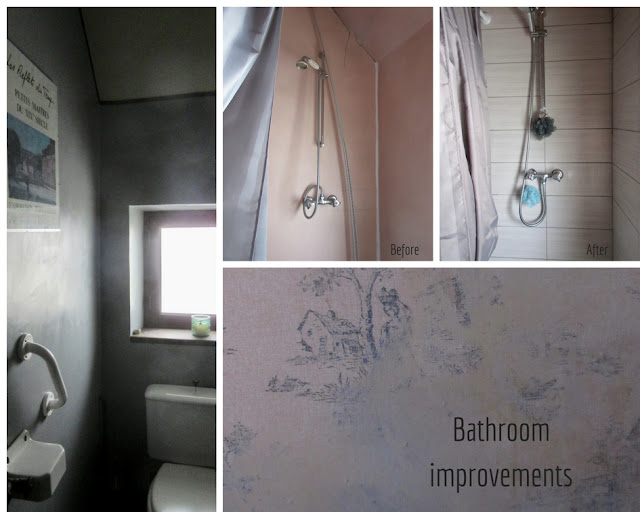 Another really quick job was the second guest room. We had spent quite a lot of time on the primary guest room but with Andrew's adult god daughter arriving with her mother I needed to create another bedroom. The only option was one of the notaire's rooms that we're using as storage. It goes without saying that the nicer was the one with the most boxes which I had to move. Wallpapered with early woodchip, now an unattractive tobacco colour I needed a quick solution. I washed it down with sugar soap and applied three coats of white emulsion (there is still discolouration but it's much better than it was). The ceiling wasn't too bad so I just cleaned it. I already had some accessories in the same shade of green, bought a lamp, installed a hanging rail for clothes and a couple of posters on the wall and we're there. Again it doesn't bear close inspection but it's a much nicer space. 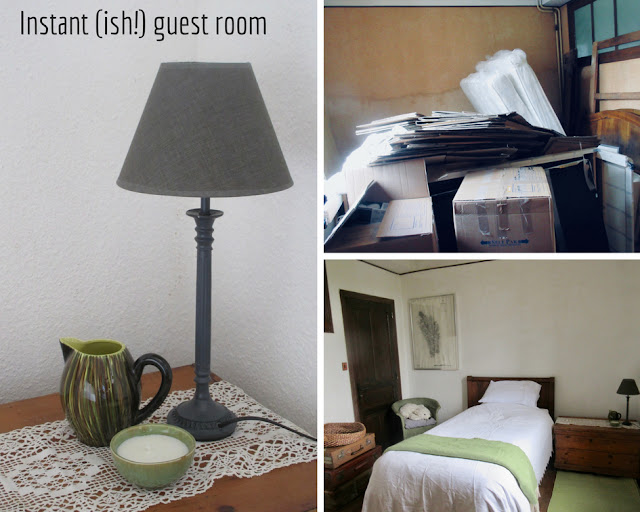 We've also started building the wall in the barn so that we can order the new windows-another deadline to meet. But we're taking a few days off as guests arrive, which is just as well as I think we need a break. Andrew has strained his thumbs, probably as building a wall from granite stones is not easy work. I managed to fall backwards over a stack of concrete blocks at the builders merchants and have lovely grazes on my arm and leg. A few days of playing tourist will be lovely!

Email ThisBlogThis!Share to TwitterShare to FacebookShare to Pinterest
Labels: @ home in Corrèze, barn restoration in France, living in Corrèze, The Old Notaire's House