A week of two halves

One of the things we liked about the Old Notaire's House was that it had central heating and a relatively new boiler. We knew that with the condition of the house it wouldn't be really toasty but at least we would have some background heat and piping hot water. The seller said that the underground oil tank held 2500/3000 litres and was over half full so I was a bit shocked when, three weeks in, the boiler stopped working and I couldn't see any oil in the sight glass. When the oil was delivered the tank would only take 1000 litres so we were concerned that there was a lot of water in there. Last weekend it happened again.

Sunday morning, with an outside temperature of minus four, the sight glass emptied and we had no heating. We went for a long, snowy walk and made sure that the fire was stacked high and things weren't too bad (possibly we were cheered by the mulled wine). First thing the following day we went to the oil company in the village only to find they were closed (that's France on a Monday for you!) so I had to make a phone call in French which I find daunting but managed to arrange a delivery for Tuesday afternoon. Temperatures were low over night and despite an additional electric heater the sitting room temperature was at six degrees when I got up. And no hot water. The oil arrived that afternoon but the house had got so cold that we struggled to get to fourteen degrees. We appear to have some issue as Andrew managed to dip the tank before the delivery and we did have about 1500 litres of oil but it just isn't making it to the boiler. The pump is fine so Andrew thinks it's something to do with the flow and return so we'll get that sorted in the spring. However it was really frustrating spending just short of 900 euros on oil knowing that you had so much sitting there.


Thursday 15th February was the day that we had been waiting for since before Christmas - the wood burner was arriving. Because of the previous week's bad weather I had been expecting a call to say that installation had been delayed but at 9.30 on the dot they arrived. Andrew had to do a quick dash to Gamm Vert to get some salt as the drive was too icy for the van to get down. I have to give praise to Sam and his team at the Invicta shop in Brive la Gaillarde. From the beginning they have been courteous, punctual and have excellent customer service. Sam speaks English which has helped us as well. We have another one, possibly two, more stoves to install and we will certainly be going back there.

The two guys cleaned up the fireplace, put a great wedge of insulation in, making sure that all the edges were sealed and then put fireproof plasterboard on top. We had seen many installations where the chimney hat had been broken but they were very careful. They even got tape measures out to make sure that the stove was exactly in the centre of the hearth. We have a traditional fireplace which is quite large at almost three metres wide, but went for the Fifty Arche design which is quite contemporary.We wanted it to make a real design statement and think it works really well. We then got instructions on how to use it and what dire consequences would befall us if we put anything else other than logs on it. 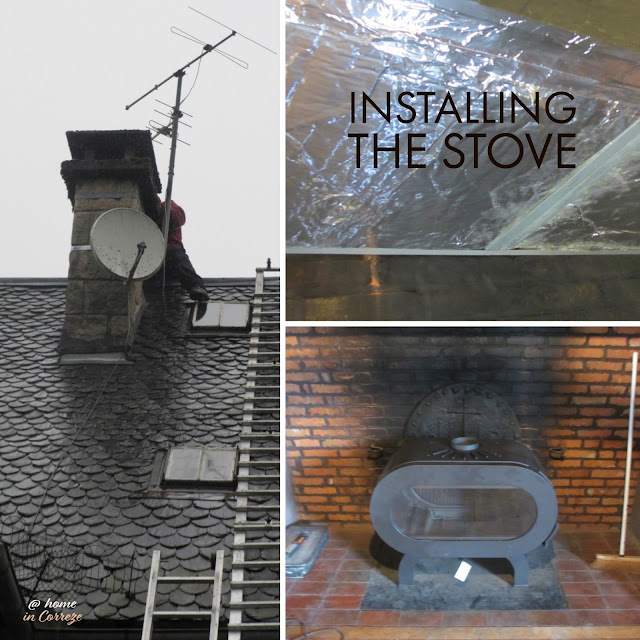 Since then it has been bliss in the house. The new stove, coupled with the 400 mm of insulation that I'd put in the attic, has made such a difference. Not only is it much warmer (we had friends round yesterday evening and we reached 24 degrees) but we can light the stove and leave it going, something we couldn't do with the open fire.