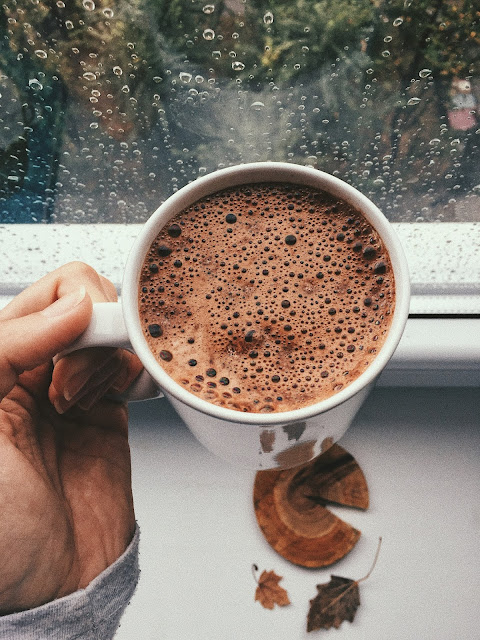 "It's the first day of autumn! A time of hot chocolatey mornings, and toasty marshmallow evenings, and, best of all, leaping into leaves!"*

Okay so there aren't many dropped leaves yet, they're not even really turning red. You can see a change in the colour on some trees but I think we're still a couple of weeks off. Finally after a very dry summer we have had a reasonable amount of rain, enough for mushrooms and fungi to spring up everywhere. The weather has been cooler, much to the relief of Mortimer who can once again enjoy longer walks. 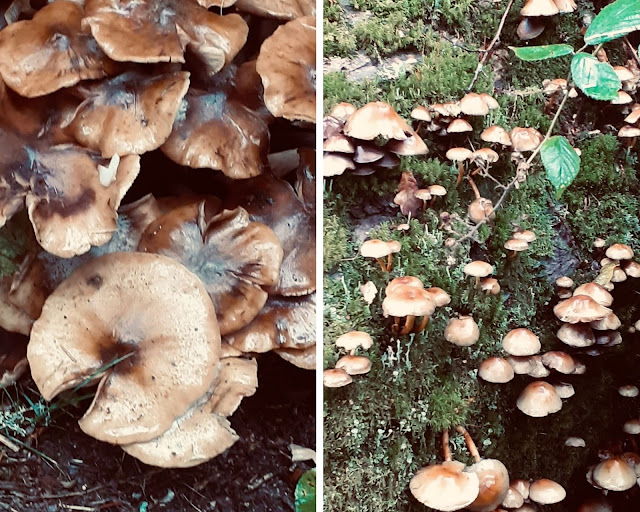 Our evenings are getting chillier now so we've had the pellet stove going. Across the two houses we have three, no four, types of heating. The main house has oil fired central heating and a log burner whilst the barn has the pellet stove and some electric underfloor heating in the two en-suites. Much as I love the romance of the log burner I really appreciate the cleanliness, efficiency and speed of the pellet stove. I come upstairs in the morning, press a button and it starts instantly. By the time I've showered and am back upstairs for breakfast everything is toasty. Our local Gamm Vert had an offer on the pellets at the end of the summer which we arranged for delivery last week. Because the store is in the village the guy trundled them down to us on his little forklift and helped us unload them into the sous-sol. Such great service! 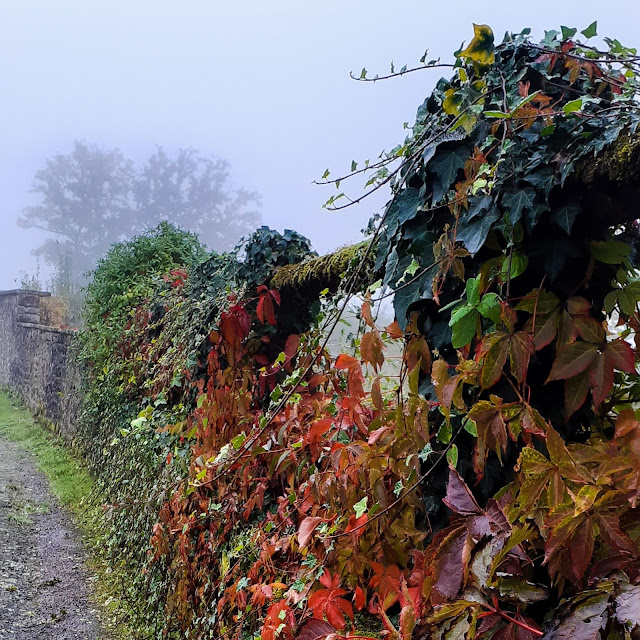 We came back from holiday with renewed energy for the renovations. I finally finished the pointing in the entrance hall and Andrew completed the re-wiring. Last Monday was crunch time as our electrician came to install the main board. It took him most of the day to connect it all but he did it and there were no errors. Andrew was particularly pleased when the earth rod registered 84  (apparently this is very good) The re-wiring has been such a huge job, so many decisions had to be made as to the position of sockets, switches and lights. Some of the rooms didn't even have all the walls so Andrew had to build these too. I can't begin to tell you the admiration I have for him. By the time we reached Monday evening we both felt de-mob happy.

We decided that we would spend the rest of the week doing some long overdue planning, well apart from a celebratory lunch. The electrical work has been such a huge part of the renovation project that we hadn't really set a structure as to the next stage  I'd already started the window renovations but that is slightly weather dependent. The next big job is plumbing but fortunately this can be broken down into more manageable mini-projects. We started by reassessing two of the en-suites and have made a couple of tweaks that will improve them. I've spent time researching bathroom fittings and orders have been placed for showers and basins, and my oh my do we have some fancy basins!

Currently the house hot water is supplied by the oil heating system but that only had to do one bathroom and two sinks (kitchen & laundry). Once we've finished we will have a kitchen & separate utility, four showers, one bath and five basins. Not only would the boiler not produce enough for all of this but oil is a very expensive option in France so we are fitting two electric heaters known as 'ballons'. The en-suite with the bath is at the far end of the house so Andrew has decided it can have it's own. Siting of this has been a bit of an issue but, because we've had time to think properly, Andrew has come up with a cunning plan which actually improves three rooms.

This week we've got back to physical work again with Andrew tackling the two ensuites over the garage. We'd decided to give them both underfloor heating but the floor level (I use the term level very loosely!) was causing quite a headache. It's oak floorboards straight onto the joists, beautiful but so irregular and impossible to tile over. The decision was made to take these up, they will be re-purposed, and then lay a new base to take the heating mat and tiles. Another advantage to this is we can stuff insulation under the floors. Sounds like a simple plan but as with all old houses it's not proving to be quite so straightforward, at one point I was levering a wall up so that Andrew could add extra joist supports.

I'm back on window duty which gives me more time to think about the room designs as it's a fairly mind freeing job. I'm still on the hunt for vintage lighting as my needs seem to grow. I worked out we have a total of 17 rooms that need lights. Now a couple of them are just loos (although one of these will sport a chandelier) while others are more complicated, I think the sitting room has three separate lighting circuits plus there will be floor lamps. I'm doing quite well at the moment though with another chandelier and a pair of fancy wall lights added to my stash. 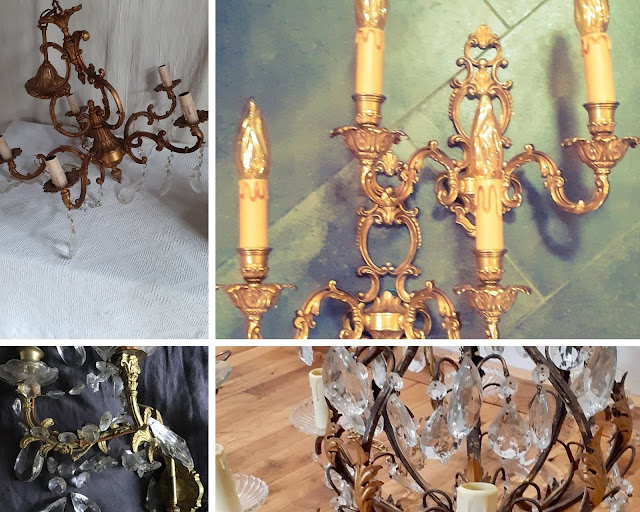 Of course autumn life hasn't been ignored. Our menu has changed, my new (old) oven dish has proved perfect for roasting vegetables. Soups have replaced salads and Andrew has already had one duck confit making session (it's the season for inexpensive duck in France). I have some figs that need to be made into jam and am even beginning to think about the Christmas cake. 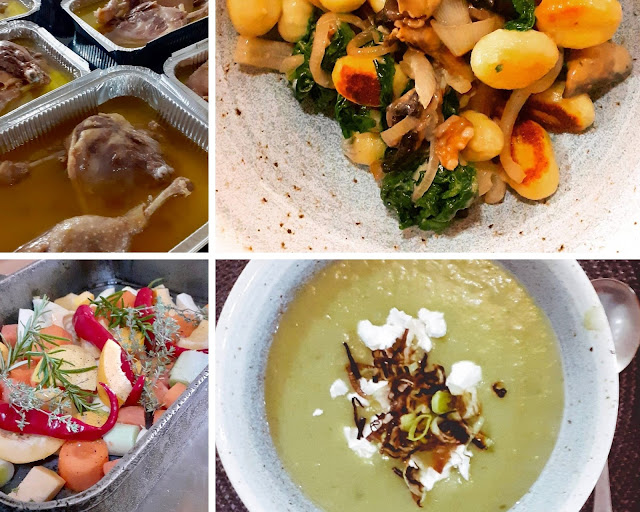 So that's it, I think we're all up to date now. As always you can follow/friend us on Facebook or if you just want the pretty photographs then we're here on Instagram. 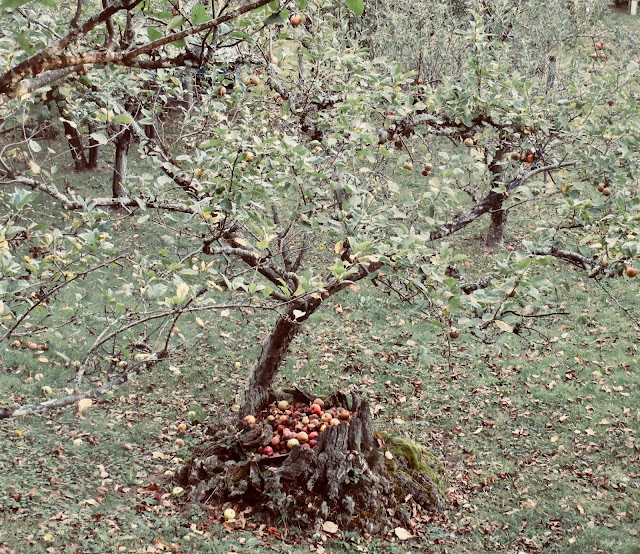