The following few weeks flew past. The original plan was to sell Nelson House and stay in the UK with Andrew's sister, who had generously offered us a room, until we found somewhere in France. I worried that our sale would fail on survey (it didn't), that our buyers would pull out (they didn't) and that it would all go horribly wrong (it didn't). We had removal companies in to quote on a move out, storage for a few weeks and then a move to France. We finally settled on Britannia Appleyard and they were superb. Wayne and his team were courteous, sympathetic and very clean - not a mark was made. They even looked after my potted olive tree!

The French purchase was nothing at all like the French magazines had said. We thought we would be rushed to sign the initial paperwork and pay a deposit but this didn't happen. I think this was partly done to circumvent one of our requests. When you buy property in France you can ask for clauses to be put in, for example that planning permission has to be given before completion. We had asked that the purchase was subject to the sale of our property. Yes we had sold but the English system is loose and even exchange of contract doesn't guarantee a smooth path. We received the contract, 60 odd pages in French (thank heavens for Google translate) and a very patient Saturday morning telephone call from our Notaire who led us through it all. We pointed out that our 'clause suspensive' had not been included. It appears that French estate agents and notaries are now wise to the vagaries of our English sales system and are very reluctant to put the 'subject to sale' clause in anymore. But our Notaire had a plan (probably why the paperwork had taken such a long time up until this point). We had to sign the contract and send it to the seller's Notaire, who then would forward it the sellers, they would sign and return, and finally a copy back to us. We then had a 10 day cooling off period. As we were so close to our UK exchange we knew that if we were to delay sending the contract back for a few days then all would be well. And it was.

We completed the sale of Nelson House on the 27th October and moved to London. All the things that we thought we would do never materialised as we went to France on November 7th and got the keys to the Notaire's House on Friday 10th. We were staying in a small gite in the village for a week. Andrew then went back to London on the 14th, the day before the removal men came back with all our worldly goods. It was down to Mortimer and myself to get things organised and start to make ourselves known. 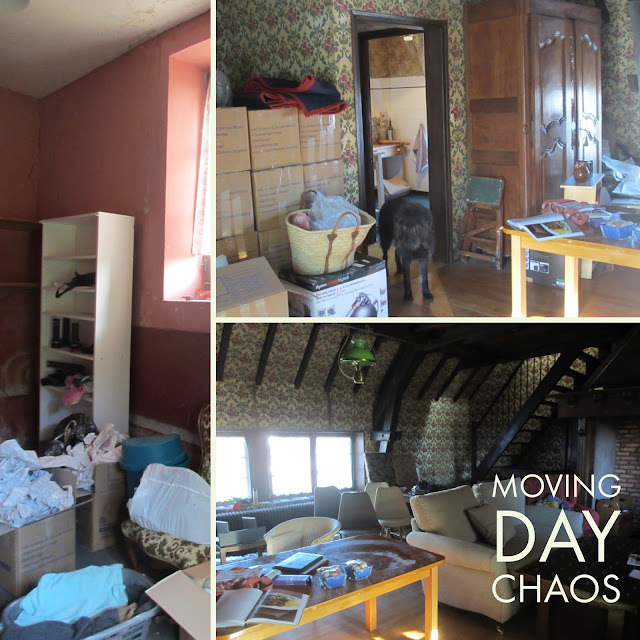 I think I became known as the mad English woman who was always walking her dog! We had sold 'my' car in England and Andrew had taken our car back to London (with a long shopping list) so I had to do everything on foot. Fortunately Correze has a small range of essential shops (how soon the weekly pizza van became an essential) so it really wasn't bad at all. It was very cold though with a night time real feel of -5C, fine during the day when I was shifting boxes but really chilly in the evening. We do have central heating but the house is granite which takes a while to heat up. There is no insulation, single glazing and window panes that only remain in place by a wing and a prayer! There were no curtains (poles were on Andrew's shopping list) and certainly no carpets. The sitting room has a huge fireplace and we had been left firewood but I had to construct a fire curtain out of packing cases to stop being smoked out. I did have the foresight to buy a hot water bottle which at least made the bed cosy. Mortimer and I did a lot of exploring, we had perfect autumn weather and I couldn't stop taking photographs. 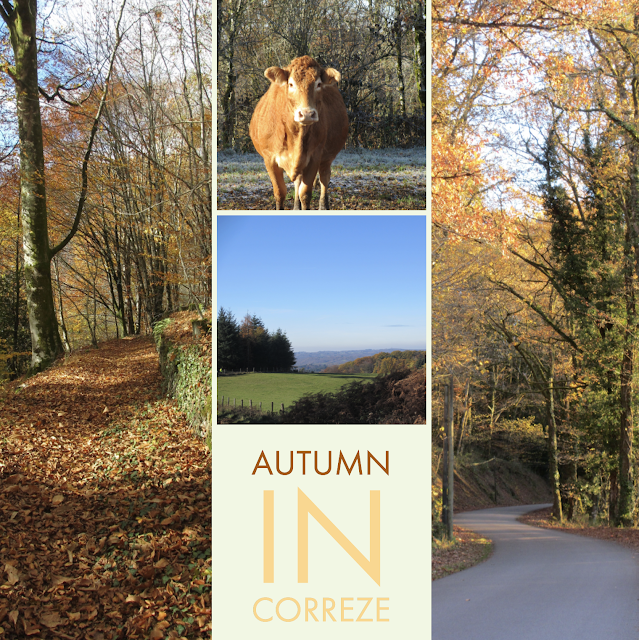 Andrew returned at the end of November, to the relief of myself and Mortimer who had taken up sentry duty on the balcony, and we had heavy snow that night. It was lovely to go out the following morning and enjoy a winter's ramble. The scenery is stunning here and it is so nice to have a choice of walks from the village.

We decided to wait until the new year before tackling any of the renovations, apart from ordering a wood burning stove that will be fitted mid-February. Everyone has been so welcoming, genuinely pleased that we have moved here. There is only one other permanent English couple, who have been incredibly kind to us, and another couple who spend six months of the year here. My French is improving, still grim but people are patient and help me along. The lady in the bakery gives me a word or phrase a day to learn.

So what are the plans? We have started work on the attached house which we are turning into a gite. Desperate as I am to start on our house, apart from a temporary decoration for a guest room, progress will be slow. We may even finish the gite and move into that while we do the main house, we're very flexible with plans at the moment.

Now I've got you up to date, blog posts will be shorter in the future.  The Notaire's House page will be updated as we go along, in fact there are already some more photographs.